— An old tradition is being revived. 1320 – For the first time documented: The Declaration of Christmas Peace in Turku (Finland). Nowadays, every year at noon on Christmas Eve, the director of the municipal administration announces the medieval greeting message, which is broadcast on radio and television. Since 1946, this tradition has also been in existence in Tornio, Northern Finland. 1632 – The six-year-old Christina – after the death of her father Gustav Adolf – became
Queen of Sweden, Grand Duchess of Finland, Duchess of Estonia and Karelia. She is regarded as a driving force at the peace negotiations for the termination of the Thirty Years’ War. She introduced the tradition of the Declaration of Christmas Peace in the whole of her domains. 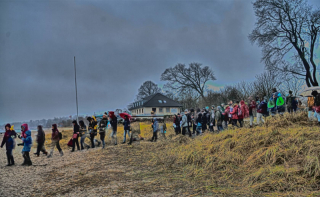 1993 – In Estonia, the tradition of the Declaration of Christmas Peace was revived after quite a long break. 2008 – Christiane Feuerstack of Eckernförde became aware of the said tradition and took it up in a changed form. Since then, every year at 11:00 hrs (CET) on 24th December – at the same time as the Declaration of Christmas Peace is announced in Finland and Estonia (12:00 hrs EET) – many people gather together in Eckernförde on the beach of the Baltic Sea for a “Christmas Peace Ritual” during which, among other things, they sing songs in various languages of the Baltic region. The location of this ritual is the highly symbolic artwork of the Latvian artist Ojars Petersons “Bridge across the Sea”, the counterpart of which is in Riga. In terms of this virtual bridge, the ritual is supposed to develop “Bridges of Lights” across the Baltic Sea, which connect the nine Baltic Rim countries with each other. Nine torches are lit and greetings are sent to the selected seaside towns Gdansk, Kaliningrad, Klaipeda, Riga, Tallinn, St Petersburg, Helsinki, Turku, Stockholm, Copenhagen and – Eckernförde! 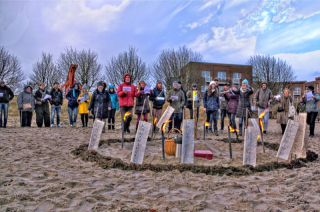 2018 – The “Eckernförder Weihnachtsfrieden” (Eckernförde Christmas Peace) celebrates its 10th anniversary! Something that started 10 years ago in a small circle of people has meanwhile increased to such an extent that more than 50 people participated in the past years – even in adverse weather conditions. A further increase in this place would presumably go beyond the scope of the previous form. That is why we would wish for it to increase in the way of offsprings engaging in it at the same time from their respective location. It does not need a lot of effort to activate a fine energy of peace! Two or three people are enough to start something that they can create according to their own imagination and possibilities. It would be nice if people were aware of each other and inwardly included all the initiatives.
Building Bridges of Lights / Bridges of Awareness across and beyond the Baltic Sea
Such a ritual of Christmas Peace builds bridges of thoughts between people and places.
It is not very important how such a ritual is arranged. What matters are the inner peace and the idea of bridges of lights, which are supposed to connect different countries, places and people as well as the past and the future. Closeness with other people creates peace. The beginning of peace is a deep loving affinity for oneself and for people in the near neighbourhood. If that is the case, peace can radiate further. In the terms of such meaning it is helpful to take up an old tradition, because traditions as such can create a connecting and nourishing substance among people.
Whoever feels inspired to join in should not hesitate to contact
Christiane Feuerstack (0049-4351-7266802)